I will admit straight away that the answer to the age of the earth will not be solved today, certainly not by this blog post.  This issue is a bit troublesome for a number of reasons.  Scientists have made an idol of their research and therefore assume that an old earth is necessary in order for their holy grail (evolution) to be necessary.  I’m being simplistic but it seems to this  observer that anything that seems to question evolution is questionable to say the least if not completely ridiculous.

Creationists tend to be just as bad.  Anything that seems to question seven, twenty-four hour days of creation is utter heresy and anti-Biblical. Once again, I’m being simplistic but not by much in this case either.

The fact is that no where in the Bible does it state that the earth is a mere 5,000 years old.  What young earthers rely upon for their dates are the genealogies of Genesis.  If one adds up the ages of the men mentioned, one gets roughly 5,000 years.

I’ve got two words for this kind of thinking: fossil fuels. Explain them to me.  God created fossil fuels just so we could drive cars?  Really?

I know that God could have created the earth with all the fossils and ground layers so that we have a useful earth.  And God could also have created everything this morning at 6:42 as well.  He’s God.  He can do that. He could create all of us with our collective and personal memories and place us in a world that reflects those memories.  That doesn’t mean that He did.  I doubt this is true.

I’m bothered by both camps.  I think they’ve both buried their heads in the proverbial sands and refuse to see what is plainly before their eyes.  The scientific community is so religiously attached to evolution that it will not examine its self or its findings outside of this box.  For instance it has been posited that the Sphinx‘ erosion is primarily due to water and that this suggests that it was constructed tens of thousands of years ago.  This flies in the face of the currently accepted archeological timeline and is therefore rejected out of hand despite the apparent evidence that points to its veracity.  There are other interesting tidbits that have surfaced that suggest advanced cultures in the distant past.  Is any of it true?  I don’t know but it seems to me that they are worth examining scientifically.  Isn’t the ancient civilization theory more plausible than the ancient alien theory?  Dismissing the possibility of ancient civilizations out of hand just isn’t an intelligent path to take.  Examining the evidence and letting science be science and then dealing with the conclusions is the intelligent and rational approach.

Use the mind God gave you

If  any proponent of a young earth is still reading ( I hope so) let me ask what evidence beyond the circumstantial evidence of the genealogies makes you hang on to this theory as the only Biblical approach?  I’ve written about this before.  A purely literal reading of the Holy Bible does not demand a young earth.  As I’ve said before, it is possible that the world was created in the first seven days and that an undetermined time existed before “The Fall.”  Simple.  Just as the scientific community ought to examine all the evidence before clinging tightly to its relatively new ideas, the theological community needs to consider feasible options in light of all evidences including science.

And that leads me to my basic thesis in all of this.  I’ve been saying for twenty-some years that there is no dichotomy between science and theology.  They are two separate methodologies, two separate schools of thought for examining God’s creation.  In most ways they are actually, complementary.  It’s when they are combined that trouble runs amok.  Like I said, evolutionists cling religiously to evolution in almost cult-like fashion.  That in itself ought to be a red flag for a rational observer.  Then we have the opposite extreme with “Creation Science“.   Claiming that God created the world in seven days is not a scientific conclusion.  It’s not even a decent scientific hypothesis.  I can say that I believe it because the Bible says it’s so.  I might even say that I trust the Bible much more than Any Science textbook or journal.  But that doesn’t make this a decision based upon scientific enquiry.  I’m not saying that this is not a rational conclusion, because I think that given all the evidence from both schools of thought, the most rational decision is actually that a supreme being created everything.  Given that, seven days is purely plausible.

In the beginning of this post, I said that the purpose of this entry was not to convince anyone of the age of the earth one way or the other. Regular readers of this blog know that I am fond of questions.  It is a good thing to ask questions.  Just because your teacher said something, that doesn’t mean it’s true.  Chances are it is, but, then, do you understand why it’s true?  There is one thing I’ve learned over the years, however; there isn’t anything that anyone Has always believed. I’m not for looking for conspiracies or anything like that, so I won’t say to question everything.  But I do believe that anything that is true will stand up to rigorous and thoughtful scrutiny so I say in the spirit of Socrates question anything. 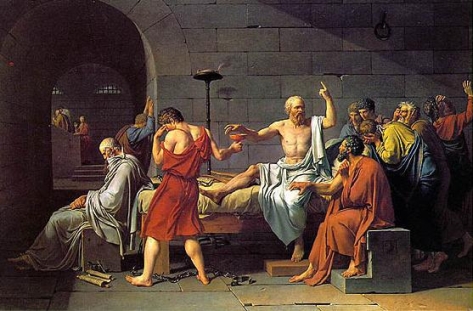 of course Socrates was tried in the Athenian court for teaching his students to question anything.

Here are some links to sites on these topics.  These are links and not endorsements.

Evolution As Fact And Theory

Evolution is a Fact and a Theory

Out of Place Artifacts

I bit of a ramble but I hope this got you thinking.