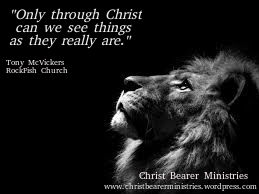 “Only through Christ can we see things as they really are.”

Pastor Tony laid things on the line (as he often does) this morning as he spelled things out for us at RockfishFish Church.  He taught about two contradictory perspectives, Man’s and Christ’s. Succinctly put, man’s perspective is all about “Me”, whereas Christ’s is all about God whether one is following Jesus, being empowered by the Holy Spirit, or following the will of our Father. One cannot  concern one’s self about one person of the Trinity apart from the others but we humans  need our boxes and our internal files in order to make sense of things and to function.  An obvious Bible passage concerning “Man’s Perspective” is, of course, Proverbs 16:25:

“There is a way which seems right to a man, but its end is the way of death.”  (ESV)

This is one of the oldest themes in Scripture. It’s the gist of the Garden story and the origin of sin.  The fruit of the proverbial tree imparted knowledge of good and evil.  God was not present and His words and their meaning were twisted by the evil one.  The story tells us that Adam and Eve chose poorly.  Eating the fruit seemed like a good idea in order to become wise like God (Who wouldn’t want that?), but the end result was death.

An orthodox Christian doctrine states that we humans cannot choose righteousness on our own.  Left to our own devices and desires, we will always fail.  We will always choose poorly. We, as  the apostle Paul did before us, do not do what we know that we should do but instead do what we know that we should not do. Our behaviors are inspired by jealousy, arrogance, ambitions, and lies.  they are, in short, demonic (James 3:13-15, paraphrase). If any of us are saved, we are sinners who are saved by God’s grace and nothing else.

Christ’s perspective is radically different than man’s perspective.  He is totally faithful to our Father’s will. Being fully human as well as fully God, He knew exactly what He was being called upon to do and exactly how devastatingly horrendous it would all end, but according to His perspective, that was the only thing He could do because it was God’s will.  Precisely because it was God’s will, it was what was, by definition, best and perfect.

In the mean time, Jesus lived a life according to our Father’s will as a child even as well as an adult as he entered His ministry.  As a child of twelve he amazed the teachers in the temple with his astute insights and questions, and he grew up obeying his mother and father.   Then as He entered into His ministry, he performed miracles and signs such as waking the dead, healing the blind and lame and ill.  He turned water into wine, walked on water and calmed storms.  He also exorcised demons.  He did all of that but there is something else that caused Him more trouble than any of that.  After all, there were examples of other men performing the same or similar works. 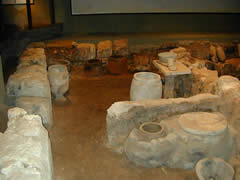 He taught as an authority in His own right.  He did not preface His thoughts and words with a phrase like, “According to so-and-so,” or the prophet said…”  No, He spoke out of His own wisdom and authority.  This went totally against Hebrew tradition which held that what came first was more valuable than what comes after. He should not have been an authority at all but He was just as the wine that He produced at the wedding in Cana was surprisingly better than the wine that was served at the beginning of the party.

Jesus was an authority.  He was not an authority simply because He was Emanuel, “God with us”. He was an authority be cause His words did not only come from Him. They came directly from the Source via the Holy Spirit.  Because of His direct link to the Creator of Everything, He spoke with the supernatural confidence that arises only as a person knows, beyond a shadow of a doubt, that one’s words are absolutely and unequivocally True. He knew the Scriptures by heart and He was in touch with His Father daily and made a point to set aside some one on one time with Him every day. These things kept Him in the Spirit and kept His direct line to the divine constantly open.

There is another who bears witness about me, and I know that the testimony that he bears about me is true. (John 5:32 ESV)

Being human, we cannot hope to achieve the perfection that Jesus displayed while on earth.  We are not God or gods.  That was and is a lie. We are created in the image of God, however, and that is no mean thing.  We are created to be like Jesus, filled with the Holy Spirit and in a close relationship with our Father and our Master, Jesus. To live in another state of being is truly death.  That is a Biblical Truth.  Accepting Jesus as one’s Lord and Savior is termed being born again of the Spirit.  Such a rebirth provides a believer with a direct line to our Father exactly as Jesus utilized. It provides the additional benefit of spiritual empowerment to  perform works of the Holy Spirit just as Jesus did.

Where we fall short (and we all do) is when we decide that we have mastered God and His Word. We take what we have learned and we attempt to utilize that knowledge for our own purposes.  We attempt to make God work for us.  Such ideas and actions make a mockery of our Lord and God Will Not Be Mocked!

It’s not all intentional. This is true.  But, whether a person fell off a cliff or jumped the result is the same at the bottom. Make no mistake the bar is set high.  Perfection is called for though it’s impossible to attain in this life. Jesus calls for a total denial of one’s self in order to follow Jesus and His example (Matthew 16:24, paraphrase).

“Then Jesus told his disciples, “If anyone would come after me, let him deny himself and take up his cross and follow me. For whoever would save his life will lose it, but whoever loses his life for my sake will find it.” (Matthew 16:24-25 ESV)

Just as in the Shema, a believer is commanded to train one’s mind and heart and soul on God at all times, all day, from the time one wakes up until one falls to sleep and all point in between.  Every single thought.  Every single action must originate with our Creator.  In fact, the Bible teaches that anything and everything that does not originate with God, is sin (Romans 14:23).  It doesn’t matter what you or I think or how we feel about something (good or ill), Every thought word or deed that does not proceed from our Lord, is putrid filth.  In the end ( and the beginning and the middle) all that Matters is the will of our Father in heaven.

So, as I have said before and will say again, you and I need to be on our knees and in the Word every single day if we are to ever have a chance of doing anything right in this life. Not only that but we must always praise God and be full of gratitude that we are, indeed, saved by the grace of God and not by our works. In that lies our eternal hope.  AMEN